Jean and Craig are both graduates from Michigan State, where they met in 1968. Jean has three degrees: 1971 BA in Business Education, 1977 MA in Vocational Education, and 1995 MA in Rehabilitation Counseling. Craig graduated in 1970 with a BA from the School of Business. Both are past members of the President’s Club at MSU and were season ticket holders for MSU Basketball from 1989 thru 2014. Jean and Craig retired to Muskegon in late 2012. Craig joined the MSU Lakeshore Alumni Club in 2013 and became Club President in 2018. We are active volunteers in Muskegon with United Way of the Lakeshore and the Medicare/Medicaid Assistance Program. Craig is a high school football official and Jean is an avid quilter.
Go Green!

Dan Langlois has been involved with the Muskegon MSU Alumni board for nearly 20 years and has served as board President, Vice President, and Secretary. 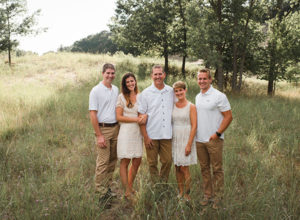 Dan obtained his Bachelor’s degree from the MSU Business School in 1987. While attending MSU, he played for the golf team for two years. After graduation, Dan returned to his hometown of Muskegon to
join his family’s business, Langlois Home Furnishings. He has worked there for over 30 years and is now Vice President and co-owner of the company. Dan took the business in a new direction by branching out from appliances through the addition of a La-Z-Boy Comfort Studio, and a Serta Sleep Center. He also owns and maintains several residential and commercial rental properties. Dan stays active by continuing to play golf and playing hockey on various, local leagues.

Additionally, Dan, he has chaired and co-chaired the MSU Alumni Golf Outing from 2002-2012. He is currently on the MSU scholarship, and events committees.

Dan, his wife Nikki McRoberts, and their children, Trisha, Steven, and Dylan, all bleed green and are all proud Spartans. Go Green!

Lance obtained his Bachelor’s degree from MSU in 1976 in Hospitality Management. He joined his father’s business in 1980 and continued the family business for over 60 years. He has been active in the Michigan Water Quality Association for many years serving as president for the past 5 years. Lance has served on the board of Directors of the MSU Alumni Club of the Muskegon Lakeshore Area for the past 10 years. He continues as treasurer for the last five years. He is a big Spartan athletics fan.

Sue was a lifelong resident of Muskegon, graduated from nursing school, and was employed by Mercy Hospital for 28 years. She passed away in 2017 after a courageous six-year battle with breast cancer. This contribution is in memory of Sue Kohley. 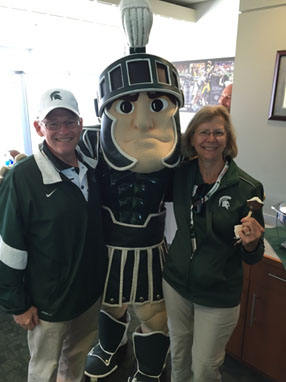 G. William (Bill) and Mary B. Robb, Muskegon residents since 2005, have been strong MSU supporters in the west Michigan area.

» Bill obtained his Bachelor of Science from MSU in 1974. After obtaining an MS from Pennsylvania State University he started a 34-year career at Michigan State University Extension, He held several leadership roles in Extension while working in the agriculture community. He retired from MSU in 2010. He has been a 9-year member of the MSU Alumni Club of the Muskegon Lakeshore Area board of directors. He has served on the golf committee and chaired the events committee for many years.

» Mary obtained her Master’s degree from MSU in 1994. She worked for MSU Extension for 25 years as an educator in family and consumer sciences and leadership and community development. She was the Muskegon County Extension Director from 2005-2010 and finished her career working with new food entrepreneurs in west Michigan. She has been on the board of directors of the MSU Alumni Club of the Muskegon Lakeshore Area since 2006. She served as president for 7 years, during which several of the existing scholarship funds were expanded and several new ones established.