Because of your support of our annual golf outing and the commitments by the Arnson, Pedler, Bailey and Kendra families, we are please to award these students with scholarships for 2017. We are proud to announce that the monies awarded in scholarships are up $5,500 from last year! 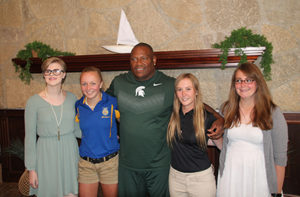 Arnson Family Scholarship – $6,000
HAILEY HOMOLY graduated from Fruitport High School and will enter MSU’s Pre-Vet Program this fall. She is an active volunteer with ‘The Noah Project’ and helped create Fruitport High School’s ‘Calling All Colors Diversity Club’. Hailey’s definitely ready to be a Spartan! She will be visiting Japan this summer with MSU’s ‘Study Abroad Program’! Arby’s, her employer for the last several years, is already missing her smiling face!

Merrill and Zona Bailey Scholarship – Two Scholarships at $2,000 each
SUMMER ECKHARDT graduated from Ravenna High School and will study Zoology at MSU in hopes of promoting elephant conservation. In high school,

Summer was a 4-year Varsity Letter Winner in track. She was also an active participant in Future Farmer’s of America all 4 years & received a FFA Academic Award from MSU. She looks forward to teaming with MSU professors to assist with research.

NICK TYLER graduated from Mona Shores High School. He has been accepted to MSU’s Honor’s College and intends to pursue a degree in Psychology or Psychiatry. You might have seen him at Hannah Bananas Ice Cream where he has worked since 2013. Also musically gifted, Nick has been the Principal Cellist with the Mona Shores Orchestra & Muskegon Area Honors Orchestra. Nick has also has attended Blue Lake Fine Arts Camp for the past (4) years. 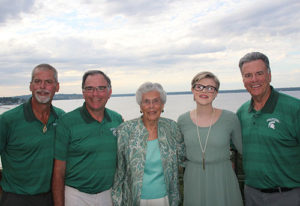 Jim and Jeri Pedler Scholarship – Two scholarships at $2,000 each
DAISY JENSON graduated from Whitehall High School and will major in Biochemistry/Molecular Biology as a prelude to Medical School and a profession as a surgeon. At Whitehall High School, her extracurricular activities included Student Council, Business Professionals of America, Rotary, and Yearbook. She also worked at Lewis Farm Market and Michigan’s Adventure. Daisy credits her Grandma for being her inspiration and for sharing her endless enthusiasm with Daisy.

MEGHAN RANDOLPH graduated from Ravenna High School. She plans to become an Agriscience Teacher and also earn a Masters Degree. While at Ravenna High School, she was Chapter Sentinel & Chapter Vice President with Future Farmers of America. Among numerous FFA honors, Meghan also earned a FFA Gold Award in Dairy Showmanship. Meghan pitched for the Ravenna softball team which won a recent district championship. She was also President of National Honor Society and actively involved in the Ravenna Band Program.

MSU Alumni Club Community Foundation Scholarship – $2,500
DOMINIQUE HORN graduated from Holton High School. She earned an Associate’s Degree from MCC & will be transferring to MSU this fall to pursue a medical degree. During her time at Holton High School, she worked upwards of 20 hours per week while still participating in Student Council, National Honor Society, Yearbook – as Advisor, OsteoCHAMPS, and Phi Theta Kappa.

Gene Kendra Book Award – $500
SIDNEY LINCK graduated from Ravenna High School. Her major is Crop & Soil Science with the goal of becoming an Agronomist. Actively involved in Cross Country and Track at Ravenna High School, she was Team Captain, Team MVP, and held All-Conference Academic Honors. She was deeply involved in Future Farmers of America as State Secretary & President for Region 5. Sidney can’t wait to share the passions and skills she acquires at MSU to make our world a little bit better!