Because of your support of our annual golf outing and the commitments by the Arnson, Pedler, Bailey and Kendra families, we are please to award these students with scholarships for 2015.

Arnson Family Scholarship — $6,000
ASHLEY BABCOCK, daughter of Curt and Heather. Ashley graduated from North Muskegon High School, where she served as Senior Co-Captain of the softball team, President of the French Club, and founding member and leader of the Blue Crew vocal group. Ashley has been accepted to the Honors College and is one of only ten freshmen accepted to the Nurse Scholar Program. Her ultimate goal is to become a pediatric nurse practitioner. 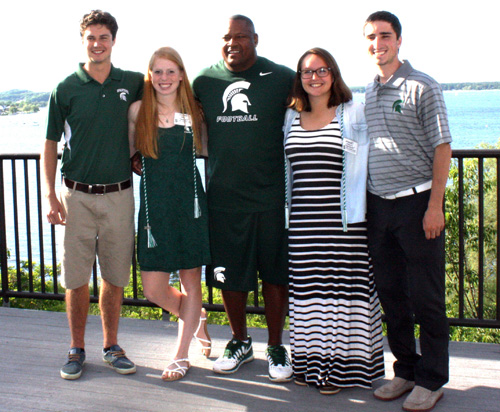 Jim and Jeri Pedler Scholarship – $3,000
RILEY DUFF, son of Brian and Maureen. Riley graduated from Mona Shores High School, where he was a member of the varsity Golf and Soccer teams, and National Honor Society. As a member of the Interact Club, Riley went on a Rotary-sponsored mission trip to Honduras to install water filters in rural jungle areas. He intends to major in Engineering, while also taking pre-med classes in hopes of becoming a physician.

Merrill and Zona Bailey Scholarship – Two scholarships at $1,500 each
MICAH PEEL, daughter of Ron and Kelley, is the winner of a $1,500 Merrill and Zona Bailey Scholarship. Micah graduated from Reeths Puffer High School, where she served on the Student Council all 4 years (including serving as Vice President her senior year), as well as Varsity Captain of the Cross Country Team for 2 years. Micah hopes to eventually earn a Master’s of Science in Biosystems Engineering, so she can make a lasting impact on ecosystem stability in Muskegon County.

Muskegon MSU Alumni Book Award – $500
ALLY NELSON is also the recipient of our first annual Alumni Club Book Award in the amount of $500.